Grace Nakimura is Gabriel Knight's one time assistant, researcher and, eventually, investigative partner. She appears in Sins of the Fathers and is a playable character in both The Beast Within and Blood of the Sacred, Blood of the Damned.

Grace is a daughter of very traditional Japanese parents, who lived in Japan until she was three, before being brought to the United States. Her parents wished her to marry Mark Kobayashi. Since 1983 she studied Tai Chi. She got a Master in History and Classics, and her parents wished for her to pursue a Ph.D. Instead, she took a hiatus and moved to New Orleans, Louisianna, around March 1993. She was seeking adventure and "to clear her head", and in part to escape the oppressive tradition her parents were pushing on her. Having a love for old books and needing to pay her bills during her stay there, she took a job at St. George's Books.

Sins of the Fathers[edit | edit source]

As the sole employee at the bookstore that did not have many customers, most of Grace's work in Sins of the Fathers is to take messages for Gabriel Knight and performing research for him. Her investigative work turns up Malia Gedde's address, the whereabouts of Madame Cazaunoux, and very old newspaper articles on the Voodoo Murders.

Early on in their history, Grace shows her feelings for Gabriel are more than that of an employer/employee relationship. On Day 3 she tries to dissuade Gabriel from selling his father's painting to Bruno. After seeing Malia Gedde entering the store for a tryst with Gabriel, she displays anger. Gabriel appears to reciprocate, as he mentions Grace's appearance on several occasions, going so far as to explicitly proposition her, though it's unclear whether this is just his normal chauvinism or a genuine liking toward Nakimura.

Grace and Gabriel's relationship changes somewhat on Day 6, when Gabriel employs Grace's drawing skills to have her reproduce Crash's tattoo onto his chest, claiming that he is going to a party with Malia Gedde. Grace suspects that he is going to the St. John's Eve and secretly follows him to the occult ceremony St. John Bayou, and when Gabe falls unconscious, she drags him back to St. George's Books. The next day, she implores him to seek safety in the company of Wolfgang, his uncle in Germany. She also arranges it so that Rebecca Knight leaves the city for her safety. During Gabe's absence she manages to get Phillip Knight's painting back from Bruno.

While talking with Gerde Hull on the phone about Gabriel, Grace is abducted by the Voodoo Cult. She is taken to the Voodoo Hounfour to be sacrificed, presumably to draw Gabriel out. It's unclear why the cult believes Grace to be of such importance to Gabriel, though this point is apparently correct.

It's also established that Grace is somewhat capable in martial arts. After Gabriel and Franklin Mosely find Grace unconscious, healing her with the Talisman, they hatch a plan to interrupt the ceremony which includes Grace facing Malia hand-to-hand. This point is never raised again in any further iteration of the series.

It is implied from his general attitude towards Grace that Mosely is attracted to Grace.

In the "good ending", Grace ponders with Gabe that there are more things to see than everyday life, and decides to abandon her studies and stay with Gabe to assist him in the Schattenjäger business.

In the "bad ending", she is with Mosely, discussing how the last descendants of the Gedde and the Ritters annihilated both families.

The second entry in the series sees Grace taking a more proactive role, becoming a playable character who takes up the research and historical context aspect of the game, in spite of Gabriel's attempts to exclude her from the investigation. Grace's overall disposition is changed from Sins of the Fathers: she is initially quite hostile to many of the other characters, but in particular towards Gerde, the housekeeper of Schloss Ritter, whom she believes to be in a relationship with Gabriel.

Grace begins the game in New Orleans, still tending to Gabriel's bookstore, a task she finds demeaning given that she gave up school to join up with Gabriel on Schattenjager investigations. Whether this accounts for her initial hostility is unclear. After her initial heated arguments, she later shows a great deal of compassion for Gerde, who is still in mourning for Wolfgang Ritter.

Grace's specialization in history proves vital to the investigation, particularly her connections within the academic world. Her thesis advisor connects her with Josef Dallmeier, who provides Paul Gowden's name. She also name-drops Yale University when inquiring with a book publisher about the whereabouts of Richmond Chaphill.

While she often regards Gabriel with dismay and sarcasm, it is apparent that they do indeed care for each other, though the extent of this is unknown. Grace dreams of kissing Gabriel, and she shows what could be construed as jealousy when she initially believes (incorrectly) that Gabriel is sleeping with Gerde. On other occasions, however, Grace describes Gabriel as a womanizer.

Grace is overall much more of a skeptic in The Beast Within than she was in Sins of the Fathers. She is initially doubtful of the efficacy of Meryl Smith's tarot readings, and expresses that she does not believe in Satan, though she does believe in good and evil. Grace is shown two things throughout the game that likely change her mind about the supernatural. The first is a vision of Ludwig at the Starnsberg See after throwing a lily into it. The second is the spontaneous bout of wind that snuffs out all light in the church at Altotting, allowing her to access Ludwig's heart-urn.

At the conclusion, Gabriel promises that Grace will be included in subsequent investigations. This scene, more than any other, hints that Grace has feelings for Gabriel. Gabriel poses the questions of whether Grace has ever just gone with her feelings, prompting her to have a look of disappointment when Gabriel then brings the conversation back to von Glower.

The third game once again places Grace in the role of researcher and puzzle solver, though she does have one somewhat action-oriented segment. Roughly half of the game is played as Grace, prominently the segments on solving Le Serpent Rouge.

The outset of the game shows Grace falling asleep when Prince James's son is kidnapped. While Gabriel leaves alone, she is brought to Rennes-le-Château by James' men, Mallory and McDougall. Grace joins a local tour and learns of the regions mysterious history.

Grace and Gabriel's physical relationship is brought up much more than either previous game. Gabriel tells Franklin Mosely that the two have come close to consummating their relationship a couple of times. Grace is openly hostile toward Madeleine Buthane, whom she regards as a sexual rival for Gabriel. She also flaunts her late-night meeting with Wilkes for Gabriel's benefit. Following her being incapacitated by the vampires, she and Gabriel have sex.

In the final parts of the game she assists Gabriel through a radio as he faces the many dangers of the underground temple. She interacts with Emilio Baza, who implies that she is pregnant. At the end of the game she leaves Gabriel in order to go to a Schattenjager training school in India, something she mentions she wished to do during the SIDNEY segments of the game.

In notes in the game files it is suggested that she is pregnant with Gabriel's baby.

Grace Nakimura was a beautiful 26-year old who had a Masters degree in History and Classics and studies Tai Chi. Growing up in a success-obsessed Japanese-American household, Grace had been rather sheltered and wanted to "experience life." Nevertheless, she finds it difficult to just relax and have fun, and she takes herself a little "TOO" seriously.

Optimistic and intelligent, Grace has a thirst for adventure, yet a strong sense of danger, a willingness to believe in the supernatural, and a talent for research. When she is not book-keeping and researching for her employer, she practices Tai Chi and oil painting, two talents which prove useful in Gabriel's first case.

Grace is Gabriel's right hand at the bookstore. She open to questions, and has information about a wide variety of subjects, and is always happy to lord her superior expertise over Gabriel. It's a sacred mission for her to puncture Gabriel's ego. Unfortunately , she hasn't managed it yet.[1]

They are very different personalties, but sometimes, opposites attract and work well together. Her ambition is to continue on these journeys with Gabriel because not only she she consider him a partner and very adventurous poers, she considers him a good friend too.

While, the relationship is platonic, her feelings toward him are definitely more than friendship. It is deep caring, and possible crush is one of the reasons that keeps her going with these quests. She believes in her work, and she knows she has much confidence in that.[2]

Grace was unhappily holding down the fort at Gabriel's bookstore off Bourbon Street in New Orleans. Life was not quite the way she wanted it to be. She's a serious student and researcher, not a store clerk. Just to make things more annoying her mother calls her regularly to ask her when she'll get a serious job, and when she'll accept a date with the 'nice japanese boy' mom has selected. What's more the growing legion of Gabrial Knight fans who visit the store can really frost her cookies in a hurry. Sales of The Voodoo Murders, Gabriels novel about his last case that includes the thinly disguised versions of himself and an overly submissive Grace, have been strong. This causes her to be filled with sarcasm, and she doesn't even try to hide it.[3]

Grace has a jealous streak towards Gerde Hull. THough the two had never met. She believes Gerde is stepping into her territory as 'researcher'. She is rather cold to Gerde when they first meet.

When Gabriel first met Grace, she was quite modest wearing a blouse and floral skirt.

But later as she warmed up to Gabriel, and became part of his adventures she switched to more casual blouse and jeans ensemble. 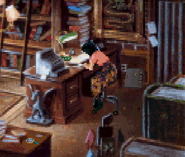 At her desk in St. Georges Books 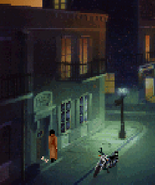 Asleep after being kidnapped at the Gedde hounfour 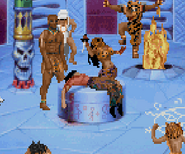 Moments before she is about to be sacrificed by Tetelo

Standing with Gabriel in the 'Good' Ending

Grace painting the Tattoo (her Glasses are missing) 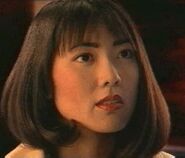 Grace and Gabriel at the end of GK2

Grace getting the library key

Grace at the Opera

Grace in a dream, warning about the Black Wolf

Grace on the phone in St. George's Books
Add a photo to this gallery

Grace in a yellow shirt
Add a photo to this gallery 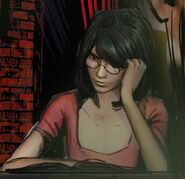 Grace in The Temptation

Behind the scenes[edit | edit source]

Retrieved from "https://gabrielknight.fandom.com/wiki/Grace_Nakimura?oldid=9238"
Community content is available under CC-BY-SA unless otherwise noted.